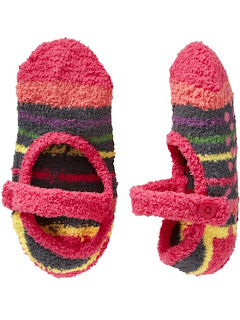 I'm not much of a sock wearer when inside at home, except when it starts to get colder outside and I'm in full-on lounge mode.  One of my sisters had some of these and upon seeing them I flew straight out to Old Navy to nab a couple pair.

I thought about posting some pictures of the various juices I've made but they all look like puke and/or blood so I'll refrain and just show you the behemoth of an appliance that dominates my counter.   This thing is truly a miracle worker, in addition to feeling crazy energetic after consuming said juices I've also come to like ... eh, that might be too strong, tolerate, red beets. 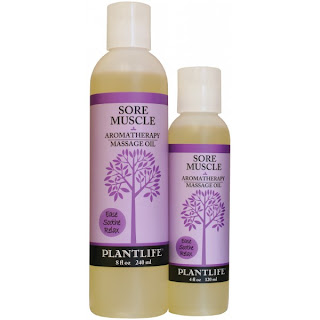 Sore muscles are not required to love Plantlife's Sore Muscle oil; it smells good and it a nice replacement to lotion after coming out of the shower.  Bonus if someone else actually rubs it in for you (I'm not that lucky)

Until recently I'd believed Mother's Milk was my most favorite stout however Left Hand and it's appearance at Valhalla, local watering hole in my hood, has changed all that.   Their milk stout is frothy, milky, delicious!

Miles.  And miles.   And miles.    FINALLY, a full on return to respectable running is in the works.  It doesn't hurt that this is my absolute most favorite time of the year to be out and that I have a few pairs of new shoes in the rotation but ultimately, it's my desire to be out there and to enjoy the time that has me loving every step of those 5280 feet increments.
Posted by Maria at 1:29 PM 10 comments:

Slowly, the laziness is melting away.  Not completely, of course, but I've got momentum on my side for now.  Obviously not enough momentum as I thought I'd published this post several days ago; pretend you're reading this last Monday.
Saturday morning started off with more perfect fall weather and a fun outing to Williamsburg celebrating the 2nd anniversary of City Running Tours.   I met up with Tracy, Tara and John and enjoyed the easy miles around a neighborhood I don't find myself in all that often.  We got some great info from our running guide, who is also a kickball teammate, Karl.  He pointed out great historical info, sweet spots to grab eats & drinks and the general lay of the land. 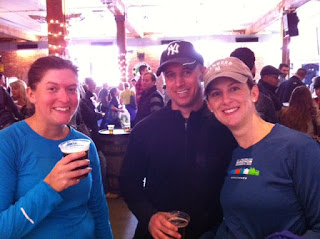 We finished the run back at Brooklyn Brewery where we sampled plenty of tasty brews, including:  Brooklyn Brown Ale, Winter Ale, Elevated Wheat and Radius (a Belgian Pale Ale). 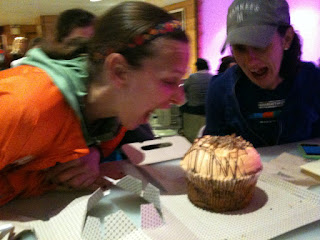 Following that and a quick subway ride back into Manhattan and I was shoving more calories down my gullet.  Address that guy, Mr. Colossal.  Nevermind that the rest of the ladies I shared this with have all recently ran at least one marathon in the last week or so... yeah, I've got all my winter fat ready to go. 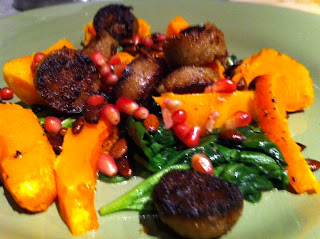 By Sunday I was drained and needing some nutrition.   Finally got around to making this super easy recipe using Field Roast; both Jen and I had been drooling over it and I think we ended up making it within a day of one another. 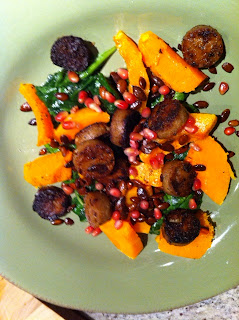 Asleep at the wheel

It's not surprising that we shuffle, stumble and practically sleep-walk through many of our "living" hours.   The cycles of sleep, eat, work, maybe some play, maybe some other stuff are fairly defined and for the vast majority, don't change radically for large periods of time, read: years, decades, maybe longer.   Shit is on auto-pilot.

What never ceases to amaze me are those events, whether a simple feeling or emotion, an experience, an individual or even a fleeting thought, that seem to momentarily shake us from zombie-like mode.  To me, it's their simplicity that makes them most delicious.  Today's snap-outta-it moment came in the form of a weather condition, specifically a thick, juicy fog.  Man, I must be hungry ... using delicious and juicy in the last 2 sentences :)  Anyways, after meeting up with Elyssa and Bojana we headed into Central Park for some easy miles around the big loop.  To say the leaves were gorgeous would be a disservice, everything is golden and red and orange; it's what people have in mind when they profess their love of fall, and running through the scene felt like a privilege.  But what really took my breath away were fog-ridden pathways, concealed expanses of ground and the quietness that comes with such conditions.  Life was happening but it wasn't, we were moving but standing still at the same time.  And all of a sudden our city of millions felt like a quaint country town strewn with runners peaking in and out of the low-lying clouds.
Because my words do no justice, behold ...

And that, my friends, is how life awakens us.  Thank god for morning running partners who also happen to be amazing photographers, Elyssa took these all and more... thanks for the wake-up!
Posted by Maria at 8:12 PM 6 comments:

You shall be my savior from myself

Like a small child, I've resorted to bribery.  While perusing the goods at the NYCM expo on Friday, I had no real intention to make any purchases.  I certainly didn't need any gear of the clothing variety but when strolling by the Brooks Running booth I was reminded that I'd intended to make a stop at Big River Running while in St. Louis to check out the new PureProject line; free time in STL expired quickly and soon enough I was flying back East.  Back to Friday night and I was slipping my sweaty & poorly polished toes into both the PureFlow and PureCadence models; I've never run in Brooks before but I know there are several models that closely resemble my stand-by Asics Nimbus.   And more importantly I needed a spark ... anything really to force myself back into some semblance of a running schedule.   I'm tired of posting about my laziness and lack of motivation and lack of commitment so with this post I hereby shut my pie hole.   Bought the PureFlows although I liked the colors of the PureCadence more and, if these work out well, may go for the dude's version of the Flow ...  because we all know how I feel about green.

Another round of posts started and orphaned in the "not published" state; I'm just so wishy washy, I can't even commit to a freakin' blog post.  Thanks to Theia for the kick in the pants, I'll use this post to participate and to share some other random happenings.

First to oblige my selection by Theia, seven random things about myself...

As far as other non-random stuff, life chugs along.  I'm feeling entirely uncommitted to anything lately, which for me only differs slightly from unmotivated.   I feel like I'm in a better place than a few months ago, mentally, but little has really changed physically.   Part of this is b/c I haven't pushed myself back into training for anything in particular despite having the Houston HM on my schedule.  At this point it's me being stubborn towards me, and lazy ... lots of lazy.   I need a huge kick in the ass!

So there's that, just a small slice of the randomness I offer the world.
Posted by Maria at 2:08 PM 2 comments:

Attn Runner Army, Beer Running Season is Upon Us!

It's getting to be that time of the year when most runners are readying for some off-months from serious training, recovering from recent marathons, triathlons, etc and looking to spend morning hours of the weekend doing something besides logging miles and miles of a long run.   Well look no further, beer run season is upon us!   If you're in the NYC area you've likely already attended at least one of Runner Army's various booze and/or food related running excursions and if you haven't, here's your chance.   And for the hoards of you running the NYCM, the timing could not be more perfect...

On Saturday, 11/12 at 11:30 come meet all your running friends at Brooklyn Brewery and spend the afternoon running about Brooklyn and ending back at the brewery for some delicious malted beverages.  The event is run by City Running Tours and this particular event will be celebrating their 2nd anniversary (which likely means cool schwag!)

Think of it as a warm-up for Claire's next beer run (12/3) and for what will likely be a repeat of last year's New Years Eve doughnut run. 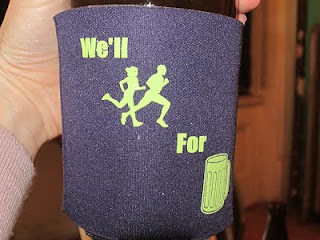 Growing up with Jeff

The number of times my Mazda 323 (affectionately known as "Eggie", RIP) and I made the 300 mile trip between Chicago & St. Louis along highway 55 in the years 1997-2000 has to be in the hundreds.  Or so it felt.  We'd pretty much go on auto-pilot, left hand contained a large coffee and handled steering, right hand dealt with shifting and keeping the tunes going.  Most often I drove only in the company of Jeff.  Jeff Tweedy.

We'd been friends since before college, he then in Uncle Tupelo and me under-age drinking, playing volleyball and collecting a paycheck from Imo's pizza.  Both being from the greater St. Louis area, he on Illinois side of the Mississippi, we had our Midwestern roots in common & shared some of the same hobbies like going out on the Landing & hitting up the gambling boats.   By the time I was in college, he'd formed a new band, Wilco, but many of his lyrics' themes remained and certainly the ties to America's heart land.  I took comfort in hearing those twangy but rocking beats and felt our friendship was solid.  I wasn't wrong.  As he and his band mates grew in popularity they moved to Chicago and identified with that being more of their hometown; this worked out perfectly for me as I also moved to the Windy City after college.  We'd see each other from time to time, often at the Riviera and smaller venues in the Chicagoland area and around Southern Illinois.  But once...  once at the most amazing of shows ever, at the now defunct Lounge Ax on Lincoln, it was like being in the living room catching up with your friends and listening to some amazing music; I still have a cassette tape of the show recorded off a DAT tape.  If only I had a sweet Walkman so I could actually listen to it.

Eventually I moved to NYC and we saw each other less but I kept up with his latest releases and caught a show whenever Wilco was in town. I can't help but feel like I grew up with Jeff and his various band mates and just as their music has evolved so have my expectations of the newest albums ...but man oh man, the older stuff can twist my heart up in an instant.  To this day, listening to Summerteeth's Via Chicago transports me back to my days along highway 55 and so many of the other songs bring about a deep emotional response.  And so I was beside myself, last week, when after selling out both shows in Central Park at Rumsey Playfield, they released additional tickets.  Snagging up a couple quickly, J and I found ourselves in the middle of the park on a dark foggy night.  The skies hinted at rain but it never came, instead the familiar lyrics of an old friend filled the wind and filled my heart with a little of what I'll always miss of the Midwest. Go get yourself some of Illinois's best... The Whole Love is available in iTunes now!
Posted by Maria at 4:02 PM 5 comments:

Maria
New York City
...can we get popcorn?